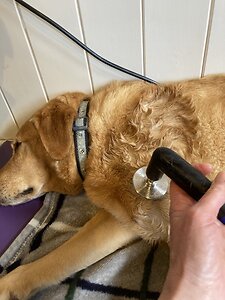 Rufus was diagnosed with elbow dysplasia at 6 months old after showing signs of lameness.
After 6 months of careful lead walks he was able to resume normal activities.
At around 7 years old he showed signs of reluctance to walk downhill or jump down from the car, and was diagnosed with arthritis in the elbows, and started anti-inflammatory tablets.
At 8 years old he then started to have problems with the muscles in his hind legs (overcompensating for pressure on the elbows) and crepitus in his back.
The vet suggested Gabapentin for pain relief but we chose laser treatment for pain relief. This worked up to point but repeat laser treatments were frequent.
We then introduced physiotherapy as well and this enabled us to have longer time between treatments.
Before the lockdown last March, Rufus was on reduced walks, 2 x 40 minutes a day and in a three week cycle; week 1 laser treatment from the vet and 1 session of hydrotherapy, week 2 laser and Physio by Gloucestershire Small Animal Physiotherapy and 1 session of Hydrotherapy, week 3 just hydrotherapy (only during the cold months November – March, just because he loves swimming happy to swim outdoors in summer).
During lockdown we did physio via zoom and borrowed a pemf mat and light.
Several times he just stopped during a walk and refused to go on, it became a worry as at around 30kg he is not easy to carry, and it was upsetting to see him in pain.
Since being able to return to Gloucestershire Small Animal Physiotherapy we have been introduced to the INDIBA rehabilitation programme.
The change after one week was very noticeable, he was much happier and was instigating play with us and other dogs. After 5 weeks of two sessions a week his muscles felt very relaxed. He is currently on one session in 4 weeks. We are no longer worried that he may not be able to get back to the car when we take him out, and wants to do more than his allowed 30 minutes. We have noticed the re-emergence of the following small acts, which we hadn’t noticed had stopped.
Instigating play with us and other dogs
Kicking leaves over his poo with his back legs.
Not minding having each paw lifted and cleaned on entering the house.
Happy to walk downhill (a gentle short slope)
Better sits, and back to stretching out both front and then back legs, on getting up
Happier up and down stairs.
Happier to trot to catch up.

Generally walking faster and wanting to go out for longer, but we do still limit his walks to around 30 minutes and try to keep them as flat as possible
Amanda & Adam

I am based between Cirencester and Stroud, working from either the Sidings Veterinary Surgery or my animal physiotherapy studio in
Chalford. Most initial consultations are at the studio.

'Do the work that's nearest,
Though it's due at whiles.
Helping when you meet them
Lame dogs over stiles.'

©2022 Mrs Artaine Harte is powered by WebHealer
Cookies are set by this site. To decline them or find out more visit our cookie page